We produce the most tender and most flavorful grass-fed natural beef you will find. Not only better for you, but better tasting than any corn-fed beef. No corn, no hormones, no antibiotics, no nasty feedlots. Just our ranch, our hay, our grass and alfalfa, and a few of our neighbor's apples!

Our ranch life started with the purchase of a $20 border collie named Cloe. 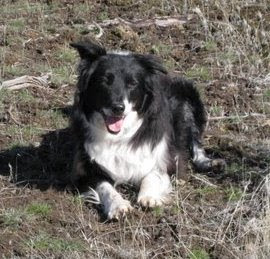 We were living in the city (Portland) where we both owned and ran businesses. A young border collie in the city demands outings, and we obliged. One such camping trip turned into something more when we spotted a "For Sale" sign along the highway. We ended up buying the Johnny Creek Ranch in 1999. It was run down and had suffered from years of overgrazing. And in true wild west fashion, it had also been the site of some recent murders! It is rugged (and some would consider lousy ranch land), but we city people were taken by the stunning beauty, isolation, and placement by the John Day River and  the badlands of the John Day Fossil Beds National Monument.

Neither of us had any background to qualify us for such a venture. Sue was an attorney who had been a pioneer in the legal mediation business in Oregon. In 1977 Jim started a junk store called Rejuvenation that sold architectural salvage, after dropping out of college. That company has grown into a significant enterprise manufacturing lighting and hardware for old houses and buildings and was recently sold to Williams-Sonoma.

Despite our ignorance of farming and ranching and country life, we showed up and went to work. Rancher neighbors helped out with lots of advice, probably mostly out of pity.We certainly reciprocated by putting smiles on their faces with all our idiotic questions. We built a new irrigation system, we planted fields, we built fence, fixed fence, went to auctions and bought old farm machinery, fixed that old machinery, and it all continues to this day. The ranch had become our home. We sold our house in Portland and bought an apartment for our visits there.

At this point, we've got the horses and the boots and we have learned a fair amount about ranching - but we can't claim to have anything like the skills of real cowboys or ranchers.  You could reasonably call it a hobby ranch. But we don't have staff - and do most of the work ourselves - so don't say "hobby ranch" to us when we are feeding the cows on a subzero morning. One thing is for certain - we've developed huge respect for the folks who actually make their living doing this. All of this is to say is that we feel very lucky to have the lives we have - and take none of it for granted.

Thanks for your interest,